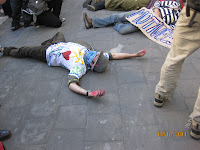 Occupy Wall Street is a people-powered movement that began on September 17, 2011 in Liberty Square in Manhattan’s Financial District, and has spread to over 100 cities in the United States and actions in over 1,500 cities globally.

#OWS is fighting back against the corrosive power of major banks and multinational corporations over the democratic process, and the role of Wall Street in creating an economic collapse that has caused the greatest recession in generations.

The movement is inspired by popular uprisings in Egypt and Tunisia, and aims to expose how the richest 1% of people are writing the rules of an unfair global economy that is foreclosing on our future.